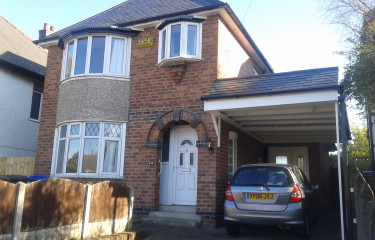 This event has now finished.

A 3 bedroom detached house built approx 1936, but without cavity walls except for the kitchen extension (added around 1960). Before moving in, in 2014, I had major refurbishment work done, including a new roof, a new boiler, re-wiring, re-siting of the side door, bricking up 2 air vents no longer required to improve draught proofing, and internal wall insulation throughout.

My own builder (Mike Russon) did the work, and the choice of insulation material was guided by what he was comfortable with installing. Internal Wall Insulation cost about £5,300. The works collectively increased the EPC score from 38 to 87. Solar PV was installed by Homeco, whilst the scaffolding was up for use by roofers, and cost £6,400.

Plans for more improvements include secondary double glazing to a small feature window. Longer term replacing old double glazing at the front of the house to modern standards, and alterations to the kitchen to include under-floor insulation & heating. I feel the Internal Wall Insulation is a winner, making the house comfortable and would recommend it. I use the iMeasure energy tracking tool, which estimates my energy costs for a full year will be £224 electricity & £202 gas, though I'm currently paying slightly more than these (£23 elec, £27 gas per month) as a new customer.

'Plans for more improvements include alterations to kitchen to include under-floor insulation & heating, and longer term upgrading of double glazed units to modern standards.  I feel the Internal Wall Insulation is a winner, making the house comfortable, and I would recommend it

I had an energy appraisal report done before the work started, and found it very helpful.

The house is a short uphill walk from the 3 bus route to/from Nether Edge (get off at Sharrow Lane). It is also served by the 4 (Sat) or 4A (Sun) bus which is an hourly service, get off at the Stag pub.

This event has now finished.